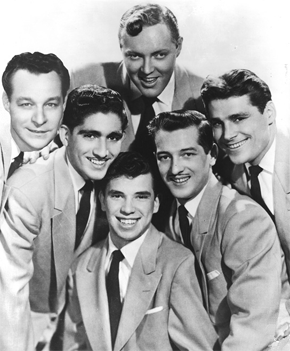 In the 1940s, the major strands of American music combined to form what would eventually be coined as rock and roll. Based most strongly off an electric guitar-based version of the Chicago blues, rock also incorporated jazz, country, folk, swing, and other types of music; in particular, bebop jazz and boogie woogie blues were in vogue and greatly influenced the music’s style. The style had developed by 1949, and quickly became popular among blacks nationwide (see 1949 in music). Mainstream success was slow to develop, though (in spite of early success with Bill Haley & the Comets’ “Rock Around the Clock”), and didn’t begin in earnest until Elvis Presley (“Hound Dog”), a white man, began singing rock, R&B and rockabilly songs in a devoted black style. He quickly became the most famous and best-selling artist in American history, and a watershed point in the development of music.

By far the most influential development in jazz in the middle of the 20th century, bebop arose in New York City with artists like Charlie Parker and Thelonius Monk. Complex harmonies and chord changes, dissonance, syncopation and edgier improvisation became hallmarks of the new style, which soon became associated with the Civil Rights Movement and other African American social movements. Among the artists to emerge from this period were Dexter Gordon, Miles Davis, John Coltrane, J. J. Johnson, Johnny Griffin and Freddie Hubbard. Bebop underwent numerous evolutions in the 1950s, and styles like soul jazz, cool jazz and hard bop emerged.

Beginning in the late 1940s, especially after Miles Davis’ Birth of the Cool (1948), a smoother form of jazz based on Lester Young’s swing tenor sound developed. This was called cool jazz, and included legendary musicians like Chet Baker, Dave Brubeck, Stan Getz, Paul Desmond, Gerry Mulligan and Claude Thornihill. Close harmony duets had grown popular in the 1940s, and were made mainstream in the mid-1950s by the Louvin Brothers.

The 1940s saw a return to the roots of Cajun music, led by Irvy LeJeune, Nathan Abshire and other artists, alongside musicians who incorporated rock and roll, including Laurence Walker and Aldus Roger. In the late 1940s, Clifton Chenier, a Creole, began playing an updated form of la la called zydeco. Zydeco was briefly popular among some mainstream listeners during the 1950s. Artists like Boozoo Chavis, Queen Ida, Rockin’ Dopsie and Rockin’ Sidney have continued to bring zydeco to national audiences in the following decades. Zydeco shows major influences from rock, and artists lke Beau Jocque have combined other influences, including hip hop.