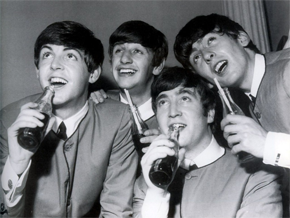 During this period, the Beatles became the most popular band of the 1960’s. In the 1950’s, the Beatles were also known as Johnny and the Moondogs and then the Moonshiners. They first became known as the Silver Beatles. They brought about the renewal of rock and roll, starting in Liverpool, England. John Lennon (10/9/40-12/8/80), led the Beatles as the lead singer and songwriter. Also writing the songs for the Beatles was Paul McCartney (6/18/42-present). George Harrison (2/25/43-present) added to the sounds of the Beatles. In 1962, Ringo Starr (7/7/40-present) became the drummer for the band. They were now known as The Beatles,(the Fab Four).

Their first song “Love Me Do” was recorded in 1962, after Ringo joined the band. In 1964, the Beatles ‘invaded’ the United States, by bringing their music here and driving the crowds wild. The Beatles bridged the generation gap and language barriers. They were trend setters, with their style of dress and hair changing the face of the young people . They also influenced the use of hallucinogenic drugs, Indian music, and Eastern mysticism.

The Beatles last concert was in San Francisco in 1966. The band broke up in 1970. Lennon went on to record solo albums and with his wife , Yoko Ono. McCartney went on to form Paul McCartney and Wings, with his wife, Linda. Harrison and Starr also went on to do solo albums. Ringo also starred in some films. Rumors of a reunion were believed until the murder of John Lennon in 1980.

Some of the groups influenced by the Beatles were The Who, Cream with Eric Clapton, and Chicago Blues. They brought out sounds such as loud music, guitar screeches, and on stage smashing of instruments. During this time, rock operas and rock musicals became popular, such as Tommy, The Who and Hair.

Formed in 1962 the Rolling Stones started becoming popular. In 1964, The Rolling Stones were first known as Muddy Waters. They had wild stage antics and brutal lyrics. The group consisted of 5 members from London. Mick Jagger led the group as the lead singer. Keith Richards on guitar, Brian Jones (replaced in 1969 by Mick Taylor). Mick Taylor was replaced in 1976 by Ron Wood (from Rod Stewart’s band). Bassist Bill Wyman and drummer, Charlie Watts made up the rest of the Stones. By the late 60’s they called themselves the world’s greatest rock band.

Motown became popular during the late 60’s with the emergence of female singers such as Diana Ross and the Supremes. Other Motown singers such as the Temptations used dance and music together to enhance their popularity. Stevie Wonder was also another Motown great. This started the trend of soul music.

The Woodstock Festival that took place in August 1969, showed that by this time that music was an important element in the life of America’s youth. This brought about a whole different look at the music industry.